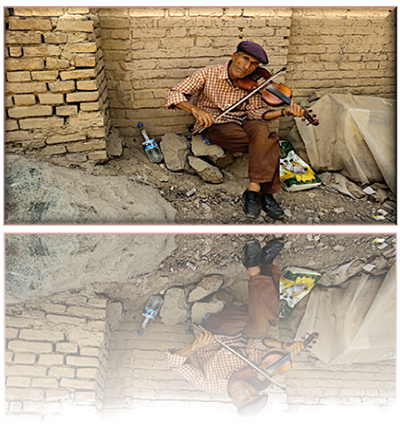 The Three-fold Constitution of Man

The following diagram and accompanying explanations will serve to illustrate "Three Planes of Being," the corresponding "Three-fold Constitution of man," and their analogy to the artist and his instrument.

Man lives and functions on three distinct planes of being:

He may be diseased upon any one or more of these planes. The true physician must look for causes of disease and for methods of treatment upon all three planes of being. The purely materialistic physician concentrates all his study and effort upon the physical-material plane of being. To him, mental, spiritual, psychical, and moral phenomena are merely chemical and physiological actions and reactions of brain and nerve substance. He has nothing but contempt and derision for the man who believes in or knows of a spiritual body or a soul.

He is like an artist who says: "'My violin is all there is to music'. The musician's art consists in keeping his instrument in good condition. Technique and the laws of harmony are a matter of imagination and of superstitious belief."

On the other hand, mental healers, and faith healers concentrate all their efforts upon either the mental or the soul plane, frequently making no distinction between the two. In the treatment of disease, they ignore the conditions and needs of the physical body, and some of them even deny its existence.

These meta-physicians are like the artist who devotes all his time and energy to the study and practice of technique, counterpoint and harmony, neglecting his instrument and taking no heed whether its mechanism is out of order or its interior filled with rubbish. His knowledge of the laws of harmonics and his execution may be ever so perfect; but with his instrument out of tune and out of order he will produce discords instead of harmony. The true artist realizes that

The true artist realizes that MIND, the player, must study SOUL, the harmonics; and that the mind must also have it's instrument, the BODY in perfect condition in order to interpret perfectly and artistically the harmonies of the symphony of life.

Likewise, the Nature Cure physician will look for causes of disease and for means of cure upon the material, mental and psychical planes of being.

Thus, will higher civilization and greater knowledge lead back to the natural simplicity of primitive races, where physician and priest are one.
After all, physical health is the best possible basis for the attainment of mental, moral and spiritual health. All buildings begin with the foundation. We do not first suspend the steeple in the air and then build the church under it. So also, the building of the temple of human character should begin by laying the foundation in physical health.

We have known people who had attained high intellectual, moral and spiritual development and then suffered utter shipwreck physically, mentally and in every other way, because ignorantly they had violated the laws of their physical nature.
There are others who believe that the possession of occult knowledge and the achievement of mastership confer absolute control over Nature's forces and phenomena on the physical plane. These people believe that a man is not a master if he does not miraculously heal all manner of disease and raise the dead.

If such things were possible, they would overthrow the Laws of Cause and Effect and of Compensation. They would abolish the basic principles of morality and constructive spirituality. If it is possible in one case to heal disease and to overcome death through the sanction of the will of a master, then it must be possible in all cases. If so, then we can ignore the existence of Nature's laws, indulge our appetites and passions to the fullest extent, and when the natural results of our transgressions overtake us, we can go to a healer or master and have our diseases instantly and painlessly removed, like a bad tooth.

All this leads us to the following conclusions:
"If there is in operation a constructive principle of Nature on the ethical, moral and spiritual planes of being, with which we must align ourselves and to which we must conform our conscious and voluntary activities in order to achieve self-completion, self-content, individual completion and happiness, then this constructive principle must be in operation also in our physical bodies and in their correlated physical, mental and emotional activities.
If the constructive principle is active in the physical as well as in the moral and spiritual realms, then the established harmonic relationship of the physical to the constructive law of its being must constitute the morality of the physical; and from this it follows that the achievement of health on the physical plane is as much under our conscious and voluntary control as the working out of our individual salvation on the higher planes of life."

First:  Our well-being on all planes and in all relationships of life depends upon the existence, recognition and practical application of the great fundamental laws and principles just explained.
Second:  Physical health, as well as moral health, is of our own making. We are personally responsible not only for our own physical and mental health, but we are also morally responsible for the hereditary tendencies of our offspring toward health or disease.
Third:  The attainment of physical health through compliance with Nature's laws is just as much a part of the Great Work as our ethical, moral and psychical development.

The Unity and Continuity of the Law

That which we call God, Nature, the Creator or the Universal Intelligence, is the great central cause of all things and the vibratory activities produced by or proceeding from this central or primary cause continue through all spheres of life, in like manner as the light waves of the sun, moon and fixed stars penetrate through the intervening spheres of life to our plane of earth. Therefore all powers, forces, laws and principles, which manifest on our plane, proceed and continue from the innermost Divine to the most external plane in physical nature. This explains the continuity, stability and correspondence on all planes of being of that which we call Natural Law.

In other words,
"Natural Law is the established harmonic relationship of effects and phenomena to their causes and of all particular causes to the one great primary cause of all things." 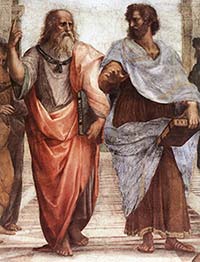 Plato & Aristotle
The School of Athens