The Formulation of Tibb

Tibb medicine was presented as a fully developed system of therapeutics by Ibn Sina - known as Avicenna in the West. A brief glance at the accomplishments of his life confirms the title by he is known in the east "The Prince of Physicians". As an ardent scholar, he became well versed in the study of the Qur'an. By the age of ten he had become a hafiz - one who had committed the entire Qur'an to memory. By the age of 16 he had mastered most of the sciences of his day, including mathematics, geometry, logic and philosophy as well as metaphysics. He became famous for his healing skills at a very young age. At the age of 17 he cured Nooh Ibn Mansoor, the King of Bukhara of an illness that the well-known physicians of the time could not. Refusing reward, he asked only that he be given access to the King's legendary library.

He was the most famous physician, philosopher, encyclopaedist, mathematician and astronomer of his time. His major contribution to medical science was his famous book Qanun fi al-Tibb - 'The Canon of Medicine'. In the Canon he summarized all medical knowledge available. His main source was Greek medicine. Unan means 'Greek' in Arabic. He integrated other systems and refined and codified all this knowledge into "The Standard Principles of Medicine".

From the tremendous impetus inspired by Ibn Sina, medicine developed in the centuries that followed him as it had never done before. By the early 18th century, the Tibb system was the basis of virtually all medicine in the Western world.

The scholars and physicians of Tibb Medicine who settled in India were not content with the known drugs. They subjected Indian drugs to clinical trials. As a result of their experimentation, they added numerous native drugs to their own system, further enriching its treasures.

The development of Tibb [Unani] Medicine as well as other Indian systems of medicine gained considerable momentum after the independence of India and Pakistan [1947].


At present the Unani systems of medicine

with its own recognized practitioners, hospitals and educational and research institutions, form an integral part of the national healthcare systems in these countries. Perhaps it was the inspiration from the Torah, the Bible and the Qur'an. that gave the Tibb physicians insight into the reaction of man, his nature, his constitution, and his relationship to the environment. An understanding of man integrated into the universe and the processes of creation ultimately resulted in a better understanding of the causes of illness and health maintenance.


The Path to Health

Health is the total overall effect of many interactions between many different variable that are all changing every moment and affecting each other with every change. Not only is it the parts that must co-operate but also a number of factors that influence the parts. Tibb recognizes six factors that determines the Health of an Individual:

It is easy to define illness in relation to the parts that make up a body and the factors that influence it. Defining health is more difficult.

Greco-Arabic physicians believed that primary matter formed "humours" or bodily fluids. These humours in turn, were seen to form most other things in the body. They understood that the final configuration of humours in a person's body determines their overall temperament. Temperament can be considered as the state of equilibrium or homeostasis in a cell, a tissue, an organ, or the entire body, or even the personality of an individual, upon which life at that level or organization, be it cell or body, depends.

On the simplest level, the connections that temperament allows are based on chemical 'attraction' and 'repulsion'. When primary matter undergoes different types of chemical combinations, various compounds, with specific temperaments, are produced. On every level, the parts co-operate to create a new overall effect. Cells co-operate to form and maintain organs. No organ can exist on its own. Each organ depends on the whole body for its correct functioning. In such system reductionism is of little value.

A Continuum of health between Conceptualized Extremes.

One way to deal with complex systems is to conceive of opposite extremes. Once this is done a person can plot continuums between these extremes. What were the extremes conceptualized by Greco-Arabic physicians?

They believed that the natural state of the human body was Hot and Moist, rather than Cold and Dry. Understanding this core concept is at the heart of Tibb.

For the process of the universe to transpire, there must be a transfer of heat. Whether you are trying to digest an apple, fight an infection or have a good idea, your body will pay the price of heat energy. We have to keep restoring our resources of heat through nutrition that generates energy, bringing physical warmth to our bodies. We also need to avoid emotional states, forms of stress, environments and illnesses that will use up our heat resources. Very small changes in your body's temperature can kill you. Even smaller changes can make you ill

While Heat and Moisture is the natural state of all human bodies, Tibb acknowledges a continuum of Hot and Cold and a continuum of Moist and Dry. Moving along these continuums between different qualities is what causes change. Any person is one of four major temperaments or combinations of qualities

These represent very slight variations from the norm. The Melancholic Temperament represents a state that is predominantly Cold & Dry. This is the exact opposite of Hot & Moist, so it is not surprising that it carries the greatest risks. The most severe disease like cancer are commonly Cold & Dry diseases

These two sets do not correspond in a straightforward way. For example, Hot and Moist may be identified as co-features at one time enabling the physician to infer certain complex phenomena - while at another time Cold and Moist may be co-features indicating very different phenomena For this reason we prefer to understand homeostasis as 'dynamic optimum functioning', rather than balance. The job of Physis is often more like juggling and mixing than balancing.

The different combinations of the qualities of Hot, Cold, Dry and Moist were organized into four elements or forms of primary matter - Earth, Water, Air and Fire. These metaphors were assigned according to the state of certain substances at room temperature, and their volatility.

They also attached Qualities [Temperaments]
to Primary Matter, as follows:


The combination of primary matter and resultant mixture of the qualities along continuums and in specific ratios, is what gives an atom, a molecule, a compound, an organ and a human being a particular temperament.

Before gin on to explore temperament in more detail we need to address the other useful way of dealing with complexity. As we said, it was the technique of recognizing which phenomena tended to occur together. In other words, what configurations of personality type, social/environmental conditions and symptoms seem to occur together with regularity? By comparing many thousands of cases over many years, physicians identified re-occurring configurations. They used these configurations or collections of phenomena as heuristics - short cuts to diagnosis. In this way inferences could be made when they only had some information about a person's temperament, body type and personal history.

Before one can understand configurations that Tibb uses, it is necessary to understand the role of humours. As we have said, primary matter gives rise to humours and humours give rise to almost every other constituent of the human being.

Every level of organization in the body is infused and connected to other levels through these fluids that Tibb recognizes as 'humours'. Humours are the primary fluids that the human body manufacturers and maintains through the ingestion and digestion of food, and the elimination of waste products. An authentic balance of humours ensures efficient metabolism and avoids the build up of toxic by-products. Humours include the various hormones and enzymes. Their main constituents are proteins, lipids, carbohydrates, mineral salts, vitamins and of course water.

Greco-Arabic physicians named these substances Sanquinous, `phlegmatic, Bilious and Melancholic. They also recognized characteristic differences in the configurations or ratios of these humours in different individuals, giving a predisposition towards being Sanguine, Bilious, `phlegmatic or `melancholic. We are familiar with some of these categories as metaphors for moods, but hole syndromes of potential diseases and emotional disturbances are represented by these concepts in Greco-Arabic medicine. While differently, the notion of humours still provides us with very practrical heuristics that do not require sophisticated equipment and that can be applied efficiently by primary healthcare practitioners, and anyone prepared to learn the different possible configuraitons.

The humoral theory was postulated by the father of medicine - Hippocrates. According to him the body contains four humours - blood, phlegm, yellow bile and black bile.

Galen expanded upon this initial concept and added qualities to the humours as listed below:

The Arabic term for humour is 'akhlat', which literally means 'admixture'. This admixture is 'the blood' that we see in our arteries and veins and also includes the fluids in the lymphatic vessels, collectively known as the Vascular Cycle in Tibb.

For the maintenance of health it is essential that the overall effect or combined qualities of the humour [Hot, Cold, Dry and Moist] is in accordance with the temperament of the individual.

In other words, a person with a sanguinous temperament requires a slightly higher quality of a Hot & Moist humour. A right proportion [homoeostasis] of these humours, with the corresponding qualities of Hot & Moist constitutes health and a wrong proportion and irregular distribution constitutes disease.

The nature of the humours produced is dependent primarily of the diet consumed. Diet that is excessive in carbohydrates where the moisture content is higher, will result in an increase in the phlegmatic humour which is Cold & Moist. There is an interesting vestige of humoral theory in modern science, which refers to the production of antibodies by B-lymphocytes as 'humoural immunity'.

Temperament or homoeostasis in the internal environment of the body is specific for each individual, fluctuating between certain minimum and maximum limits. Any detection of a disturbance in this equilibrium can predict disease long before any symptoms familiar to orthodox medicine appear.

Central to the practice of Tibb, therefore is the diagnosis of temperament. Knowing your temperament is like knowing your strengths and weakness, your predisposition to conditions of health or disease, empowering you to take control of your health.

The four Temperaments were classified as

What more basic question could any human being ask of themselves than:
What is fixed, what is under my control and open to change?

If we are to make choices about our lifestyles, we need to know what cannot be changed deliberately and what can. This is the age-old dilemma of nature vs. free will. Is there any sense in battling your own essential physical type, or your own internal vis medicatrix natura?

A person's ideal temperament is fixed. It is literally the personal organic constraints of an individual. No two people are the same according to their outlook, behaviour, expression of feelings and psychological or functional capabilities.

All of us are a combination of the four personality types in varying degrees. However, temperamental types exist in the form of

which is invariably next to each other. 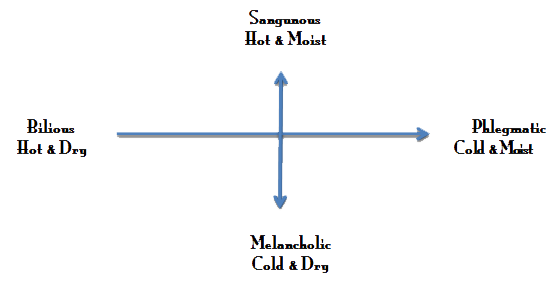 In other words, a person who is a combination of Sanquinous [Hot & Dry] and Phlegmatic [Cold & Moist] temperament will have an overall temperament between these two.

It must be noted that the characteristics and even the personality traits are not only unique to a specific temperamental type, but can be common under different circumstances i.e.